The Guardian By Simon Bowers and Jill Treanor

Opposition peers proposing to amend Bank of England bill, which would unwind tougher regulation set up by the coalition in 2013 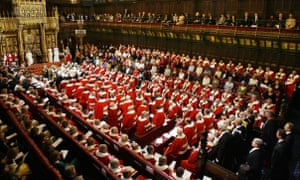 The Conservative party does not have a majority in the House of Lords in the way that it does in the Commons. Photograph: Adrian Dennis/AFP/Getty Images

Opposition parties want the chancellor to think again about his proposals to unwind tough regulations on banker accountability, introduced by the coalition government only two years ago.

Senior Labour and Lib Dem front bench peers have proposed an amendment to Osborne’s Bank of England bill that would frustrate the chancellor’s plans in a vote on the amendment on Tuesday.

Labour and the Lib Dems are more strongly represented in the Lords than in the House of Commons, but past attempts to use their numbers to block the government in the upper house have also called into question the current political balance among peers.

Opposition parties are understood to have received detailed briefings on Osborne’s latest plans from Bank of England regulators. But one senior Labour source said: “We have not seen anything in [Osborne’s proposals] to suggest they will improve the current legislation.”

Stuart McWilliam, senior campaigner at Global Witness, said opposition parties are right to intervene. “This is a terrible time for the government to water down reforms which would hold senior bankers personally accountable for bad behaviour.

The government should not scrap the vital measures it argued for and passed just two years ago.”

Current rules on banker accountability were beefed up in 2013 by the then coalition government in response to widespread anger that so few bank executives had been held accountable in the wake of the 2008 banking crash, the PPI mis-selling fiasco, and the Libor rigging scandal.

Central to the current regime are tough new regulatory standards for senior managers, proposed initially by the parliamentary commission on banking standards and adopted by Osborne and the then business secretary Vince Cable.

At the time, the two cabinet ministers said the new measures “comprehensively address the problems with standards which have done so much to undermine society’s faith in the banking system.”
The measure included reversing the burden of proof for bank bosses facing investigations into their conduct. The coalition government insisted requiring bosses to demonstrate they had acted responsibly — rather than requiring regulators to prove otherwise — was a better way to hold them accountable for failures on their watch.

In October this year, however, the chancellor announced plans to drop the reversed burden of proof. This revision is being pushed through as part of the Bank of England and Financial Services bill, which is due to be debated in the Lords on Tuesday when peers can table amendments.

The bill currently contains a clause which says that “no senior manager will be guilty of misconduct unless the regulators can prove that the senior manager did not take reasonable steps to avoid the breach happening”.

Labour’s Treasury spokespeople in the Lords, Lord Davies and Lord Tunnicliffe, along with LibDem Baroness Kramer, have put forward an amendment aimed removing this clause, number 22.

A senior Labour source said: “If the government wants to try to push through these reforms to the banking sector to defend their friends in the City then good luck to them.” Labour is thought to be quietly confident sufficient peers will support the amendment if Osborne does not offer any concessions.

A spokesperson for the Treasury declined to comment on the challenge from opposition peers. A spokesperson said other parts the Bank of England bill would see City regulators’ powers extended deeper into the finance industry.

The Conservative party does not have a majority in the Lords in the way that it does in the Commons.

Banks have been lobbying for changes a series of reforms introduced since the 2008 banking crisis. On Thursday, international regulators in Basel, Switzerland, stepped back from measures which banks feared would have forced them to hold more capital.