But many will miss the backdrop forming right behind them. Britain is now halfway through a transformative decade: staggering out of a historic crash, reeling through the sharpest spending cuts since the 1920s, and being driven by David Cameron towards a smaller state than Margaret Thatcher ever managed. None of this is accidental. While much commentary still treats the Tories as merely muddling through a mess they inherited, Osborne proudly promises a “permanent change” and “a new settlement” for the UK.

The chancellor has the ambition, the power and the time – 10, perhaps 15 years in office – to do exactly that. Between 1979 and 1990 Thatcher permanently altered Britain and, going by what we already know, Osborne is on course to engineer a similar shift.

I think of the country we are morphing into as Austeria. It has three defining characteristics: it is shockingly unequal, as a deliberate choice of its rulers; it looks back to the past rather than investing in its future; and it has shrunk its public services for the benefit of its distended, crisis-prone banking sector.

Let’s start with the unfairness. Remember Osborne’s promise, “we’re all in it together”? He is ensuring the opposite. Wanting to make massive cuts without rendering his party unelectable, the chancellor is deliberately targeting austerity at those sections of society where he calculates he can get away with it. That means slashing local council funding, hoping angry voters will turn on their town halls rather than Whitehall. It means running down prisons.

What may be clever Tory politics is desperately unfair policy. The Centre for Welfare Reform calculates Osborne’s austerity programme has so far hit disabled Britons nine times harder than the average, while those with severe disabilities were 19 times worse off. Watch for them to be punished again on Wednesday, as the government looks to cut welfare and local government again.

The same welfare cuts mean that Austeria also has a very lopsided geography. It’s the south-east that gets the Olympics, Crossrail, the bulk of the infrastructure projects and the property speculators’ cranes. It’s London that attracts the foreign cash. Whatever the pledges about northern powerhouses, they have been completely undercut by its policies. According to Steve Fothergill and Christina Beatty, economists at Sheffield Hallam university, the past five years of welfare reforms have hit parts of the post-industrial Labour-voting north up to four times harder than the true-blue heartlands.

Take Blackpool, which has lost £863 a year for every adult of working age. In Cameron’s backyard of west Oxfordshire, that loss shrinks to £290. The academics’ list of the areas least troubled by the welfare cuts could be a rollcall of Tory safe seats: Richmond, Epsom, Windsor, the Cotswolds … On the flipside, individual families and entire local economies in southern Wales, the old seaside towns and holdouts of the northern working class will emerge from the end of this decade as battered as they were under Thatcher.

Remember these cuts were meant to shield the young from an ever-growing debt burden? Cameron’s policies mean the asset-poor young suffer most. I remember a post-budget briefing a couple of years ago when a well-known political analyst noted that he was the oldest person in the room and sardonically thanked everyone for protecting his pension payments. Meanwhile, young people will have to contend with cash-starved further education colleges, an unsustainable university system and a jobs market that is becoming a place of permanent precariousness. They will also be working in an economy that isn’t interested in the future: where big firms sit on piles of cash that they won’t invest but merely return to shareholders.

Peter Taylor-Gooby at the University of Kent points out that the UK spends less on research and development as a proportion of its national income than America, China and the EU (which includes, lest we forget, countries such as Slovenia and Bulgaria).

That fits with the national motto of Austeria. “Backwards, not forwards!” It’s a place where the past is honoured – as represented by the elderly or those who own houses, shares and other assets – while the future is ignored. Again, this makes perfect political sense for Osborne: it’s the elderly and the wealthy who turn out to vote, after all.

Analysing the chancellor’s tax-and-spend plans for this decade, the Resolution Foundation (chaired by Tory big beast David Willetts) observes the government is increasing “the share of overall spending on older people and health while reducing the share going to working-age families and economic growth”.

The Austeria of 2020 is a country that has hacked back public spending in order to insure itself against another banking crash. That trade-off was made starkly clear by Osborne himself in parliament just a few weeks ago. 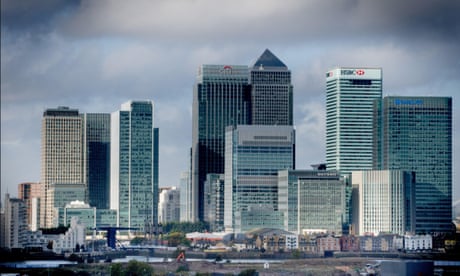 Accused by a former head of the Treasury of using alarm about debt as a “smokescreen”, the chancellor replied: “If tomorrow the financial crisis were to hit us, we would have a lot less firepower than we would have if our debt was half [he presumably meant twice] what it is today … I think it is a responsibility to prepare your country for whatever the global economy throws at it … ” I recommend you watch the entire exchange from 15:56:50 onwards.

Rewind those words. Osborne is no longer claiming that his cuts are to stave off a credit downgrade or to encourage growth. His justification now is that Britain needs to have spare cash for when the next meltdown comes. The chancellor who promised to sort out the bankers is now doing the opposite.

He is making bank bosses less, not more, accountable for their errors, he has yanked tough-talking regulator Martin Wheatley out of his job, and he has appointed as his top central banker a man who wants the UK to have a banking sector as big as Iceland’s before its crash. Since Big Finance always means Big Crash, the rest of us will have to go without funding for schools, local government and the rest of the public sector.

In 2008 Britain’s bankers plunged the rest of the country into a crisis. What followed was austerity: the policy where those most responsible for the huge bill looked for the working and middle classes to pay for it. By the end of this decade, that policy will have become a regime, Austeria. In it most of us have to make do with less money in our pockets and dilapidated public services, to allow those at the top to continue as though nothing has happened. Because for them, very little has.